EMURGO Academy: Learn About and Create dApps on Cardano 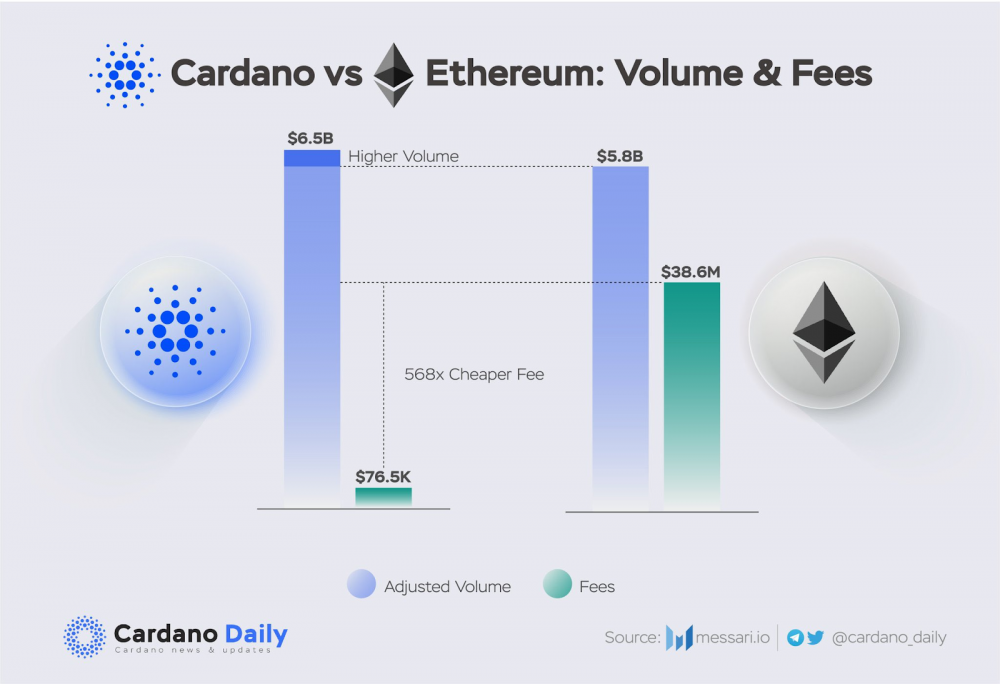 In the process of creating a more advanced architecture for its blockchain protocol, Cardano has taken a more research oriented approach. This has led to many innovations that give it an edge when it comes to the creation of crypto assets on its network. One of these powerful innovations is the native token standard.

What are tokens on Ethereum?

Most people in the blockchain industry are familiar with the idea of tokens introduced by Ethereum in 2015. We can see that there are thousands of tokens listed on the Ethereum network, and many of us have used them before.

Yet, in Ethereum there are no tokens, at least not as many imagine. Most of us would assume that these assets are actual defined constructs that the Ethereum ledger understands as independent assets. Then, the wallets can recognize these assets when they are sent to the wallet’s crypto address. That is actually not the case.

Tokens in Ethereum are smart contracts, these contracts keep a record of the addresses that have called the Transfer or TransferFrom functions in the contract. The Ethereum ledger doesn’t understand assets as independent assets natively, but only processes them through smart contract interactions. Their use actually involves a long process summarized in the next flowchart.

The entire set of steps is only to “send” one token to another wallet but in reality, the smart contract records and maintains each token transaction in a separate “state based” sub-ledger . The process becomes exponentially more complex if we try to map out dApp interactions, lending pools, decentralized exchanges, NFTs, and many of the other services in the blockchain industry.

This level of complexity and design has opened Ethereum to many vulnerabilities such as:

Ether is not recognized by dApps

The complexity of the model results in the problem that decentralized applications on Ethereum cannot process Ether (ETH) transactions. As the cryptocurrency Ether is actually a crypto asset not contained in the ERC-20 token standard.

Ether as the native crypto coin of the ledger has from the start been a different asset than tokens. So, dApps on Ethereum are unable to recognize ETH and use it when interacting with other tokens or assets on the ledger.

A workaround was developed to patch this weakness, the ERC-20 token wrapper. It basically is a smart contract that wraps any asset sent to it in the form of an ERC-20 token. Users wanting to use ETH in the dApp ecosystem have to send Ether to this contract.

The wrapper contract locks the ETH and returns Wrapped Ether (WETH). But this creates discrepancies in the price of ETH and WETH. First, as a smart contract itself, the wrapper contract charges ETH when it’s used. Second, WETH cannot be used to pay gas fees, so its value is always slightly lower than ETH.

This is a difficulty inherited by all EVM compatible blockchains. Binance Smart Chain, Polygon Network, KuCoin Community Chain, etc. all have to use wrapped versions of their native asset inside their respective dApps ecosystems.

Too many smart contracts

Since there are no actual tokens, as independent assets, on Ethereum, any token exchange involves a smart contract computation. Any new token introduced to the ledger, is a new smart contract that has to be hosted in the network’s nodes and executed when used.

For this reason, the Ethereum network is very congested. All token interactions, even the simplest transfer, entail a smart contract computation. All these computations happening one after the other are what make the main Ethereum network expensive to use and slow.

If we take a quick look at the ranking of top gas consumers on GasStation, we see that among the top is USDT and USDC. Both popular stablecoins are most of the times used for simple transfers between crypto wallets. Yet, the two combined consume a little above 30 million US dollars in gas fees.

Most of the time, only the transfer function in the USDC or USDT smart contract is being called. But that’s enough to make these two stablecoins some of the highest gas consuming smart contracts on Ethereum.

Each token is a new possible source of mistakes

Each new smart contract for a token has to be coded and deployed by independent teams. Some are more knowledgeable than others, and are able to implement token standards in secure and efficient ways. But that’s not a guarantee across all projects.

In the Ethereum ecosystem there are repositories like OpenZeppelin that provide standard templates for the most common token standards like ERC-20, ERC721, ERC-1155, etc. and projects can freely use them to launch their own tokens.

Solidity is the most popular computer language to develop in the blockchain industry today. Yet, it remains in a testing phase as versions of it keep coming out, and changing syntax, code structure, and other changes to how the language is used

All of the token templates are subject to constant changes as the Solidity language is improved. Some of the changes make portions of older templates incompatible with newer versions. Yet, all of these different tokens written in older and newer versions of Solidity have to co-exist in a distributed ledger.

Smart contracts cannot be updated once deployed into the ledger (at least not without some questionable workarounds!). The tokens written in older versions of Solidity are still there, and are widely used. Developers need to take into account all the different versions of tokens deployed to the Ethereum network. The result is higher complexity in the ecosystem.

All of these design decisions culminate in one single result – any serious product on Ethereum and similar EVM networks has to be audited. The token smart contract is a source of major vulnerabilities, the different versions of Solidity collide with each other, and each new token is actually a smart contract

For this reason, projects launching on Ethereum have to pay for audits by security firms. This is needed to uncover any major, medium, or minor flaw in the code implementation. These audits can take a long time and can be very expensive.

A not insignificant portion of a new project capital has to be destined to fund these audits. For this reason, small teams of developers are not able to pay for them and gather enough traction to their products. Audits on Ethereum have become a major obstacle that prevents meaningful innovation in the blockchain industry.

Tokens first began in the Ethereum network. For this reason above all, they were an experiment that was conducted live among the entire blockchain industry. Now that the blockchain world has had a number of years to absorb the lessons learned from this first iteration, Cardano is introducing a new way to create crypto assets.

What are native tokens? How are they different?

From the start Cardano wanted to have a multi-asset ledger. This meant a token in Cardano would share almost all of the properties of the ADA cryptocurrency in the network. In that way, transactions between tokens in the ledger would not need any smart contracts computations.

The result would be a massive reduction of costs and complexity when moving assets around in the Cardano blockchain. Also, the complexity of the network would scale down as there would not be any need to deploy smart contracts every time a token is launched.

Finally, improvements in the contract language used by Cardano, Plutus, would not affect token deployment. The result is that there would be no conflicts in the ledger between different Plutus versions used to launch different tokens in Cardano.

The first part of the Cardano architecture meant to address any scalability issues presented by tokens is the separation between the settlement and computational layers. All crypto assets in Cardano are recorded in the base settlement layer. As the name suggests, is a part of the ledger that deals with recording the final status of transactions.

After the smart contract has executed the instructions that related to the tokens, the final result is recorded on the settlement layer. In this way, smart contract computations and token transfers don’t even execute in the same part of the ledger. They remain separate and can happen concurrently.

As we stated before, Cardano is a multi-asset ledger. This means that tokens, NFTs, and ADA on Cardano have virtually the same properties when they are transferred at the level of the settlement layer. The only difference ADA has over other tokens is that it can be used to pay for transaction fees

This was accomplished after several upgrades that took place with the end of the Bryron era and the start of Shelley:

Allegra — it started the process of transforming Cardano from a single asset ledger to a multi-currency ledger, Also, it improved many of the aspects of Shelley.

Mary — it introduced the native token standard and allowed developers and community members the ability to mint tokens and NFTs.

All these different improvements have made it possible for tokens and other crypto assets to be launched on the Cardano network. The tokens do not need a smart contract to be issued and thus do not create computational bottlenecks in the network. Let’s look at the native token standard.

What are native tokens?

The Cardano Blockchain was designed from the start to create, transact, and destroy tokens in the ledger itself. By native it is meant that aside from sending and receiving the main currency, ADA, users can also interact with other assets from the start without the need for smart contracts.

This functionality was designed into the Cardano protocol itself from the start of the Shelley era., Native tokens or assets are almost identical to ADA from the perspective of the settlement layer. They are the way projects on Cardano can issue tokens for their different platforms.

Most times a distributed ledger deals with transactions, to ensure these are executed some ground rules have to be inplace.

Third party crypto assets on Cardano are native to the ledger. The network itself has the ability to recognize other crypto assets aside ADA, and treat them no differently than the native cryptocurrency.

Simplicity is the main advantage of native tokens. This makes token minting much more friendly in Cardano and less prone to human mistakes. Additionally, this removes a lot of opening left from human error. 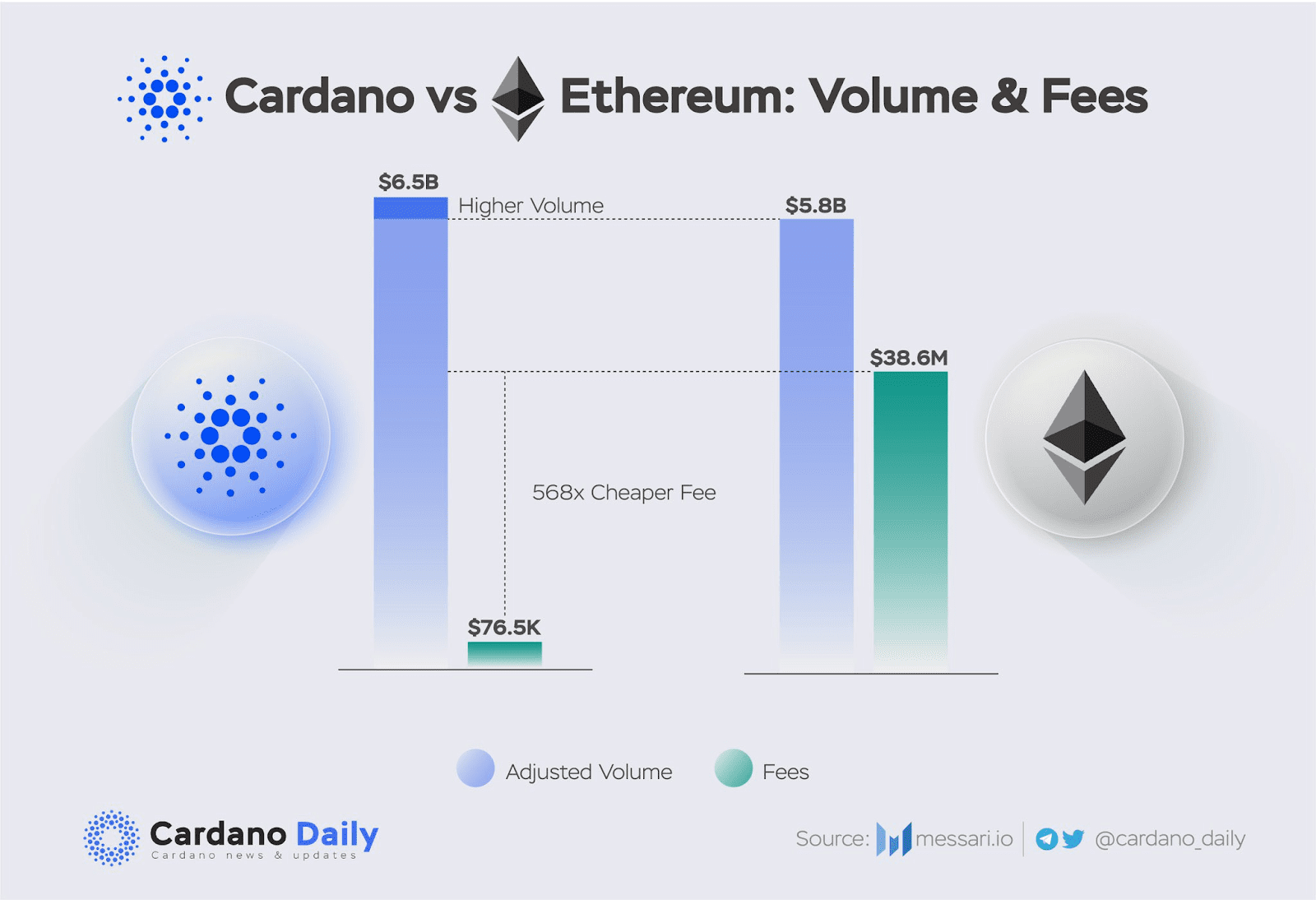 A graph made over the period of January 2022 comparing transaction volume on Ethereum and Cardano plus the fees paid during that period. No doubt the advantages of native tokens will make the Cardano ledger a competitive network for the future of DeFi and blockchain technology in general.

rAll in all, Cardano has elevated the concept of tokens to a whole new level compared to existing blockchain protocols such as Ethereum. With efficient, deterministic, scalable and economical token solutions being built on Cardano, it will not be long before we see a thriving token economy on the Cardano protocol!