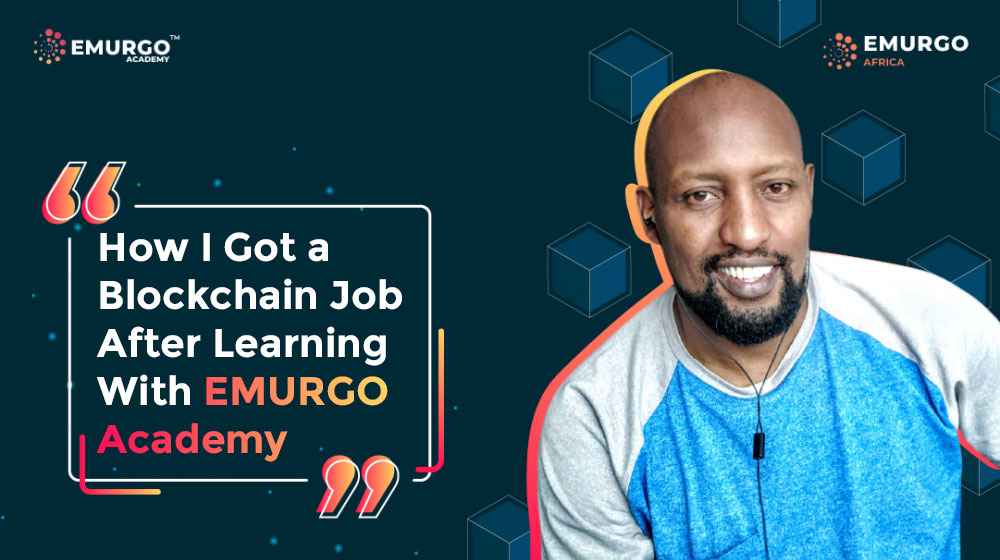 EMURGO – the official commercial arm and a founding entity of Cardano – is strongly committed to providing career empowerment opportunities through online blockchain courses taught by its education unit EMURGO Academy.

Blockchain job openings and opportunities have soared over the past few years and there are no signs of stopping as blockchain proficient developers and experienced candidates are in high demand by businesses and blockchain-focused companies.

Businesses and blockchain projects are seeking those who understand and know how to build/market Web3 applications in decentralized finance (DeFi), NFTs, DAOs, and the metaverse.

Recently, one of EMURGO Academy’s former students, Kelly Muhindi, completed a Cardano developer course, and is now pursuing his dream job in the blockchain industry as a full-time blockchain developer with The Africa Blockchain Center.

In our Q&A below, we learned more about his journey and how EMURGO Academy’s course helped him to achieve his goal.

Hello Kelly. Please introduce yourself to the community.

Hello. My name is Kelly Muhindi and I am from Nairobi, Kenya.

Until recently, I was a full-stack software developer working for a startup in the healthcare sector.

In January of this year, I resigned from the role and joined The Africa Blockchain Center through EMURGO Africa’s partner Adanian Labs – an African venture studio and accelerator – as a full-time blockchain & software engineer.

In my free time, you would find me spending time with my family, reading, traveling, or tinkering with electronics for DIY projects.

I am not really sure exactly when I first started exploring Bitcoin, but I believe it was sometime in 2015 after hearing about it on the BBC news.

When I started out, I was mostly curious and started buying small amounts (and got some free from online faucets!).

Over time as Bitcoin matured, I got more interested in the technology and discovered that there was more to the technology and at some point in 2017, I had the idea that I could get involved with the space so I bought some books from Amazon and started the journey to working in blockchain.

What got you interested in Cardano? How well is Cardano known in Africa among blockchain-interested people?

I had been reading and watching news online about blockchain and cryptocurrency.

One day, YouTube recommended a video so I clicked on it and it turned out to be a life-changing click!

That video was the now famous whiteboard video from Charles Hoskinson, where he eloquently introduced the idea of a third-generation blockchain that was purposely designed to be scalable, sustainable, and interoperable using best engineering practices, for everyone.

By the end of that video, I was all in on Cardano.

It is another one of my goals to start building a local meetup community that will focus on sharing, learning, and eventually building great businesses on Cardano that can provide real solutions.

Could you tell us about your experiences with EMURGO Academy?

I came across EMURGO’s blockchain education courses on Twitter, so I signed up and started the Cardano Developer Associate Module.

Although I had the basics on the technology prior, the sessions went in-depth on discussing the fundamental ideas behind blockchain systems in general while the community aspect of classes introduced interesting ideas and approaches to looking at blockchain that I would otherwise not have encountered.

For instance, there was a very enlightening session that comparatively analyzed how different blockchains approach consensus and scalability problems.

One of the goals I had when joining the course was to transition to become a full blockchain developer.

I was surprised when I got offered an opportunity to work in that role for a local blockchain company Adanian Labs.

This has motivated me even more in course engagement to get the most value and eventually transfer that value to those in need by developing useful decentralized applications.

Could you tell us more about how you got offered to work in blockchain with Adanian Labs?

Interestingly, the opportunity came through EMURGO.

Some months back, I got a message from my instructor requesting if he could link me with someone who wanted to discuss some opportunities.

I agreed and a few weeks later, we had a meeting with the CEO of Adanian Labs John Kamara, who happened to be based in Kenya.

John was also linked with The Africa Blockchain Center (ABC), and after some more subsequent meetings, I officially started working with the company.

What has your experience with Adanian Labs been like? What do you do with them?

Specifically, I am with ABC, which was until recently under Adanian Labs. Currently, we are in the process of setting up a bare metal stake pool that will promote Cardano locally and have more people getting into the space either in building or investing.

In addition, we are very soon starting work on some great projects which include building an identity management system and an NFT marketplace which will engage and empower local artists.

What are your goals with Cardano moving forward? What’s the potential for Cardano in Africa?

Currently, I am focused on growing my skills in the Cardano ecosystem by actively working on developing Cardano applications.

In the long term, I intend to create impactful applications on Cardano and possibly start a company.

I plan on creating a local community of like-minded individuals that will share learning and grow to eventually start building on Cardano.

In Kenya, and generally Africa, I see that we tend to have a common set of challenges some of which can stem from a lack of robust systems in places such as identity management, lack of strong property rights, corruption, and/or lack of transparency, lack of access to basic financial services, etc.

Blockchain technology, and more so, Cardano, is well-placed to become the base layer to a wide range of applications that would address some of these issues wholly as it is designed from the start to provide societal inclusion through its technological platform.

This is why the potential for Cardano in Africa is huge.

How has EMURGO Africa and Adanian Labs provided opportunities to the local community?

I follow EMURGO’s blogs regularly and sometime late last year, I saw that EMURGO had established EMURGO Africa as part of a new $100 million Cardano ecosystem vehicle to provide funding for local projects to be built on Cardano.

This itself provides a huge opportunity locally as there are many great startups that will benefit because as the projects develop solutions, the Cardano ecosystem will continue to mature.

At the local level, Adanian Labs and ABC are very involved in creating opportunities that locally benefit the community.

As an example, ABC provides training in blockchain and development, investments, and provides consultancy on how local businesses can leverage blockchain technology to grow their businesses.

Adanian Labs has also incubated and continues to incubate a host of local startups providing essential solutions to everyday problems, including many in their portfolio that have gone on secure additional funding rounds.

As the official commercial arm and a founding entity of the Cardano blockchain, EMURGO is uniquely positioned to leverage its extensive knowledge of Cardano’s technical development to offer curated educational courses on Cardano to interested students.

All courses are taught by professional instructors with actual blockchain experience.

For more information on each of the courses and to contact a representative, please visit the link here now!